On the 1st June 1995 the Queen bestowed the title of City on St David’s, once again giving it the recognition it rightly deserves. 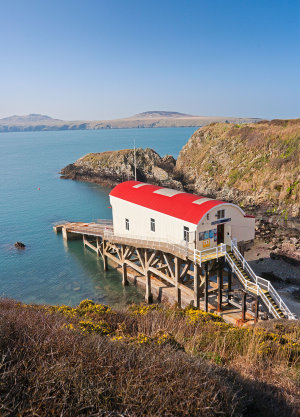 St David’s Life boat station is situated just a couple of miles from Britain’s smallest city at Porthstinan. (St Justinans) in Ramsey Sound. It was established in 1869 and like all Life boats stations is funded purely by public donations.

Over the years they have had various boats at the station, the latest being RNLI Garside, however, in November 2012 it was announced that the station would receive a new Tamar class vessel to be named the RNLB Norah Worley.

Whitesands Bay is a wide sandy stretch of beach in St Brides Bay, Pembrokeshire which sits in the Pembrokeshire Coast National Park.

The beach which is about two miles from St David’s is an award winning Blue flag area and is ideal for surfing or just lazing around and watching the waves.

The area is ideal for those that wish to explore the rugged coastline on foot with Pembroke Coast Path giving access to the secluded bays of Porthmelgan and Porthlleuog. There are also a number of interesting archaeological sites along the coast such as burial chambers, Stone Age hut circles and Iron Age field systems. It is also said that this was the site were St Patrick stood when he had is vision to travel to Ireland to convert the Irish to Christianity.

Caerfai Bay is the closest beach to St David’s in Pembrokeshire; it is an unspoilt area of sands which is reached by steep steps at low tide. The Cliffs are a distinctive red sandstone and of the same type as used to build St David’s Cathedral.